Thomas Krasonis climbed up 7 places to grab P9 in an amazing Race 2 at the Brands Hatch circuit.

After a dismal Race 1 in a track that Thomas knows very well and likes as much as any circuit, Race 2 saw him getting a hard-fought top 10 finishing position.

Having started from P16, since he had achieved the 16th fastest lap time during Saturday’s race, he had an uplift battle to score points.

And battle he did, as he gained two positions on the opening lap, and steadily built on that.

One retirement in front of him, helped him reach P13, and then had his eyes set on a top 10 spot.

In the next 10 laps, he clinically passed his opponents, with his last battle for P9 being the most impressive, as he closed up to Veronesi, who was 4 seconds ahead of him. He cut down the gap, and then made the pass to ensure he had a good spot to stay in the top 10, and in the meantime he had achieved a lap time of 50.6 seconds, the 5th fastest of the race.

In a track where the overtaking is difficult, due to its narrow straights and many medium-speed corners, Thomas put on a show and he achieved his goal, which is always a top 10 finishing position.

In addition to the points that P9 awards in EuroNASCAR, Thomas gained 4 more points for his overtakes during the race.

You can watch the whole race in the player below:

Thomas Krasonis had to retire from Race 1 at the Brands Hatch NASCAR weekend, due to a failure on the gearbox.

It was one of those days for Thomas Krasonis, who failed to finish the first of two races at the Brands Hatch circuit, because his gearbox failed in an unfortunate event.

Thomas started the race from P14, and even though he lost one position after the first lap, he climbed up to P12 after the Safety Car period ended.

For the next 6-7 laps, he continuously battled with his teammate, Vladimiros Tziortzis, as well as Naveh Talor and Yevgen Sokolovskiy for P11.

However, on lap 19 he suffered a problem with his gearbox on the EuroNASCAR FJ 2020 car, and had to pull off the racing line and onto the grass, to retire the car.

It was a really good showing of attacking, yet patient driving style from Krasonis, who will now aim for a better result come Race 2, on Sunday afternoon.

The 2021 NASCAR Euro Whelen Series continues this weekend at the Brands Hatch circuit, and Thomas Krasonis will be competing in the EuroNASCAR 2 category, with the EuroNASCAR FJ 2020 car.

It’s been a lengthy break between the opening race weekend in Valencia to this coming weekend in England, West Kingsdown.

After a very positive Race 1 at the Ricardo Tormo circuit, Thomas Krasonis is ready to tackle the second round of the season.

It’s a track that Thomas knows very well, having raced there previously in in 2019, in the EuroNASCAR 2 category.

The 1.944 km circuit is the Indy version of Brands Hatch. Situated in the southeast of England, it offers a unique challenge for the monstrous NASCAR machines, with just 6 corners, all but one being right handers.

After the first two races of the season, Thomas Krasonis is at the P15 in the standings, with Academy Motosport holding the third overall position on the team standings.

‘Brands Hatch is definitely the most exciting race for me personally,’ said Thomas Krasonis.

‘For one, it’s my favorite circuit on the calendar, and secondly, I have had my best ever finish in the series there. Therefore I am looking forward to race again in British ground in a high level competition once again.’

Find below the full schedule of the race weekend, which you can watch on EuroNASCAR’s YouTube channel. 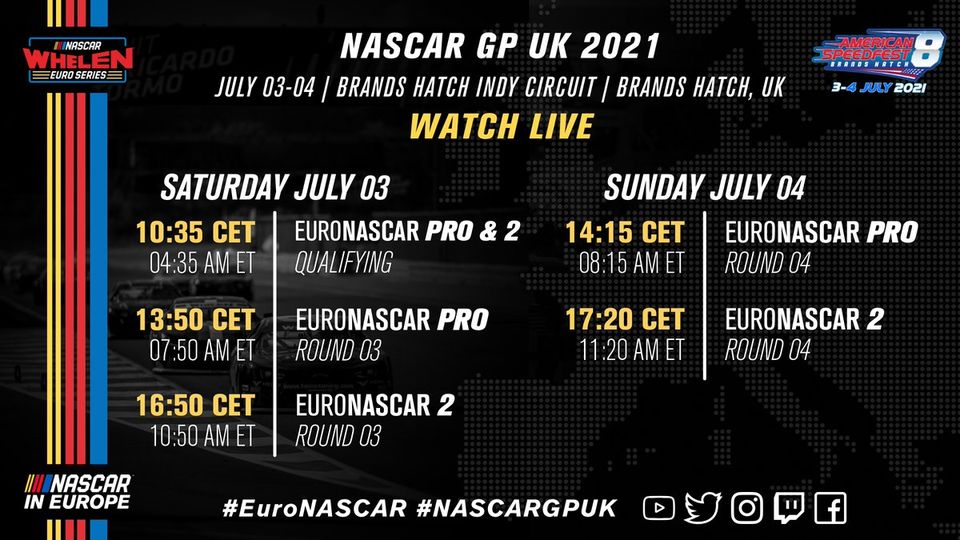 Here are the standings in the drivers’ and teams’ championships after the first two races of the 2021 EuroNASCAR season.

Next up in the championship is the Brands Hatch round, in the UK, during the 2nd and 3rd of July.

Thomas Krasonis had a DNF in the second race of EuroNASCAR in Valencia, but managed to leave Spain with points after the first race weekend.

The second race at the Spanish GP of the NASCAR Wheelen Euro Series ended ingloriously for Thomas Krasonis.

After yesterday’s race, which saw him finish 7th after starting from 14th place, the goal today was for another strong race.

Starting from 11th place on Sunday morning, Thomas managed to climb up to 10th, but with the differences being small and the opponents all close up, the battles were intense, with him falling 12th on lap 6.

For the next laps, he continued to fight, aiming for the top 10.

As he was pushing, and as the race now needed 3 laps to finish, he was out of the brakes while getting down the gears and found himself in the sand trap, at the exit of the last turn.

His race was done there, keeping Saturday’s 7th place and its 30 points as his best result of the weekend.

The next round of the championship comes on June 19-20 in Most, Czech Republic.

You can watch today’s race here.

Thomas Krasonis climbed from 14th to 7th place in the first race of this season, giving battles until the last lap.

The first race of the NASCAR Wheelen Euro Series at the Ricardo Tormo circuit in Valencia ended positively for Thomas Krasonis.

The young Greek driver started from 14th place, having found it difficult to make a clean lap in the qualifiers that took place earlier on Saturday.

Thus, the goal was to make a good recovery in the race, which started at 17:00 in Spain.

In the rolling start, Thomas was in his element and managed to win 4 places at the end of the first round, climbing 10th.

Lap by lap he was gaining ground, and by the lap  5 he had managed to pass for 9th place.

On lap 6, the #22 of Justin Kunz had a puntcure, and this allowed Krasonis to get up on P8.

In the next 9 laps, he had Naveh Talor and Advait Deodhar up close, who seemed to lag behind the rhythm of the Greek driver. Indeed, with 3 laps left, he managed to pass Deodhar first, while in the penultimate lap he fought with Talor, passing him temporarily, before returning to the 7th position, where he finished.

Seven winning places in the 60 km race for Krasonis, who is now waiting for the start order of the race for tomorrow (11:30 Greece, LIVE here), determined by the fastest laps of each driver from today’s race.

The standings after Race 1, which you can watch here. 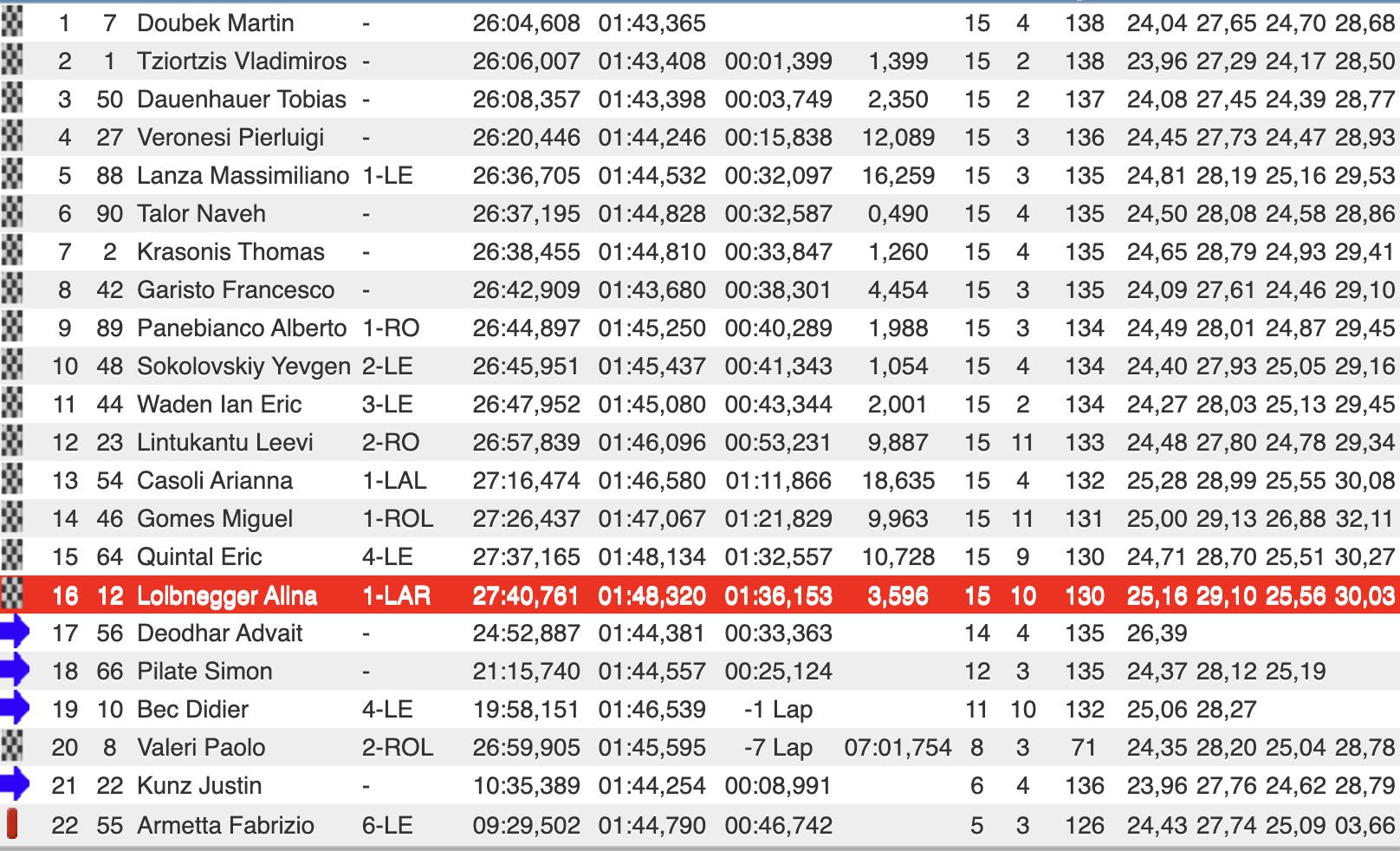